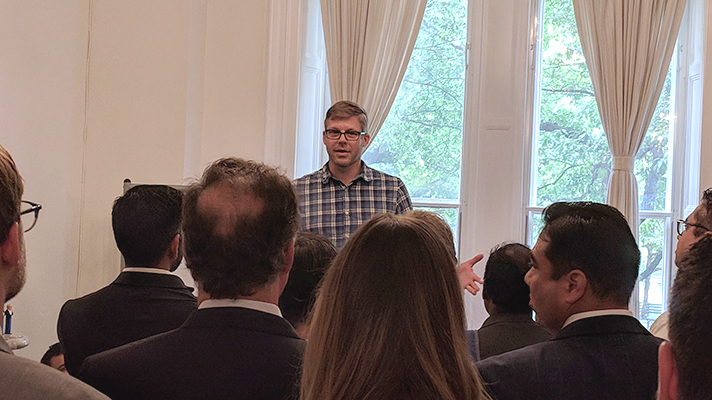 The Health App Economy Is Coming: Prepare for the Data Quake

Ahead of the Blue Button Developer Conference on Monday, I walked into the US Digital Service for a pre-party of sorts. The USDS hosted this mix of people in full suits rubbing elbows with tattooed technologists wearing t-shirts.

In the packed house, USDS Deputy Administrator Edward Hartwig climbed onto a couch to congratulate the team that worked with the Centers for Medicare and Medicaid Services on the first Blue Button 2.0 API.

“We’re at the forefront of what digital medicine is going to be in this country,” Hartwig said.

Here’s a look at what happened at USDS and the ensuing White House Developer Conference — and what it signals comes from the federal government and a handful of companies that dominate healthcare. health and technology.

“EHR vendors need to develop clearer terms of service than exist today. Without this, many emerging companies will likely struggle to consolidate their business models.”

A taste of what to expect from digital medicine: open APIs, FHIR and cloud computing, coming together to eradicate, or at least improve, barriers to interoperability.

While Monday afternoon’s White House hackathon focused on Blue Button 2.0 arming health insurance companies with an API to make claims data available to developers and researchers – a worthy pursuit indeed – something even bigger is brewing.

The companies haven’t disclosed exact details on how they will use FHIR, although Microsoft VP Peter Lee told me that the software giant will support FHIR in several of its products, including including Office 365.

Interoperability is obviously an important element. The less discussed angle at this point, however, is the innovation that the wider availability of data, claims and the like will ultimately spark.

And if what some of the other speakers at the Blue Button event said turns out to be true, the upcoming changes will have even more impact than meaningful use. “We should see a massive system unleashed. It’s not going to work any differently than the consumer ecosystem. Physicians and clinicians are consumers too.”

Dataquake: Get used to the word

A Silicon Valley venture capitalist has coined a word you don’t hear every day: dataquake.

“We’re going to look back on 2018 and 2019 and say, ‘Those were the years of the data quake,'” said John Doerr, chairman of Kleiner, Perkins, Caufield and Byers. “Data needed to be interoperable, innovators came together to move us to an app economy.”

Consider the Apple App Store. This model has essentially created a brand new strong economy of about $50 billion, Doerr said, much of which was earned by software developers.

“We should see a massive system unleashed, bigger than any other vertical,” Taneja said. “It won’t work any differently than the consumer ecosystem. Physicians and clinicians are consumers too.”

It won’t happen overnight. HIMSS Innovator-in-Residence Adam Culbertson, who was also present at the event, explained that the startups that CMS, EHR vendors and others look to for undertaking data-driven application development and APIs need clearer terms of service than exist today. . Without it, many emerging companies will likely struggle to consolidate their business models.

Culbertson said the Blue Button API is a great place to start. Ideally, this will impact other innovations such as EHR manufacturers seeking third-party application developers.

“CMS’s resulting work helps establish a standard of the art of the possible in this emerging new ecosystem of API-driven health applications,” Culbertson added. “The winners will be better-informed patients, consumers and happier providers who will have the chance to see the market stimulate new innovative technologies.”

An app economy is where healthcare, like so many other verticals, is heading. “It’s hard to say where the first wave will hit, whether it’s apps, consumers, or providers. But the vision is long overdue.”

Unleash the power of consumption

“Seema made it personal,” Rab said. “And when things get personal, they go a long way.”

Verma, for his part, said we are at the start of a digital health revolution. “We have the ability to take that data and unleash it. We unleash the most powerful force in our economy: the consumer.”

We all know that changes are coming to health care. Indeed, FHIR, open APIs and the cloud are no longer predictions, they are the future of healthcare.

“It’s hard to say where the first wave will hit, whether it’s apps, consumers, or providers,” KPCB’s Doerr said. “But the vision is long overdue.”

Apple and Aetna team up on new healthcare app

The Scale of a Small Healthcare App: Harnessing the Power of Caring for Loved Ones